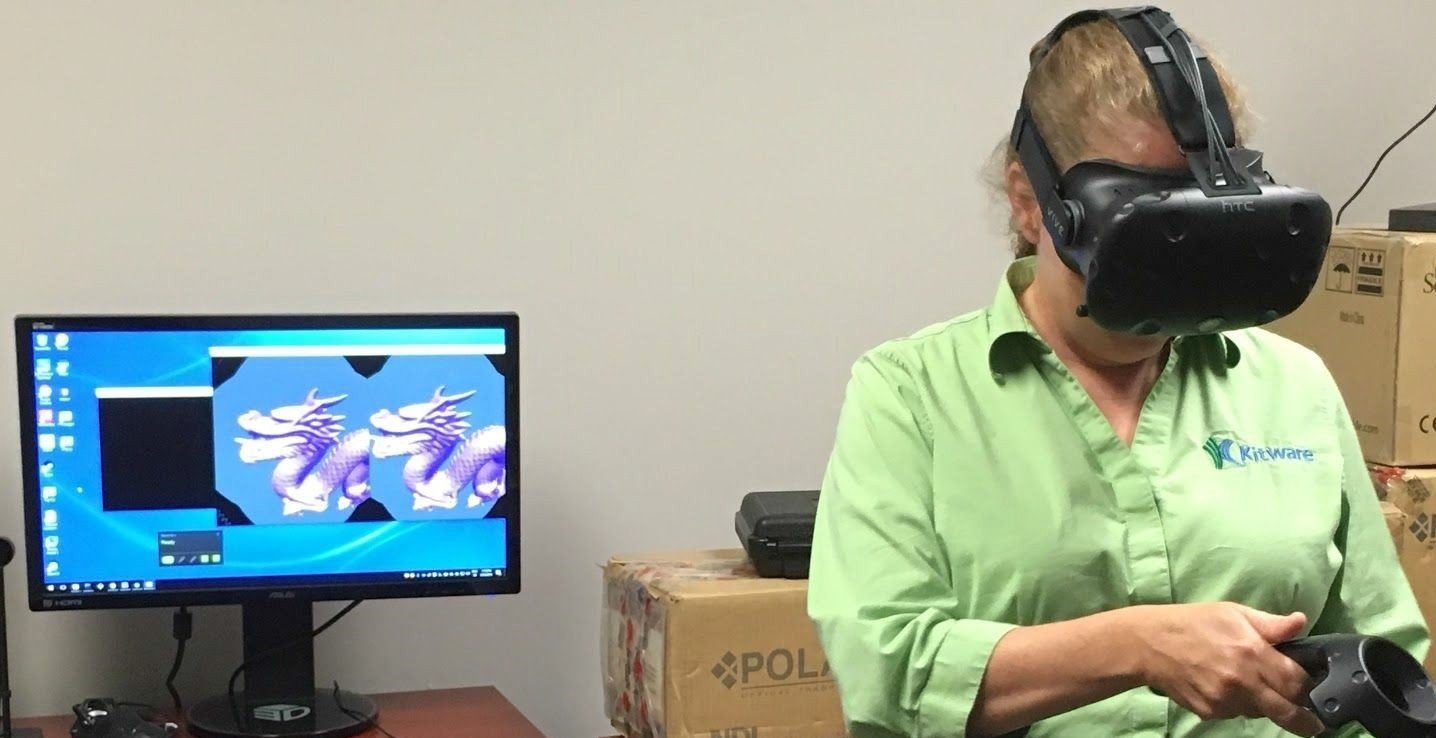 Kitware announced that it will introduce two approaches at IEEE Virtual Reality (VR) 2017 that greatly simplify VR application development through the use of the Visualization Toolkit (VTK). The introduction will occur during the presentation of a paper that members of Kitware co-authored with researchers from Indiana University and Idaho National Laboratory.

“Previously, application developers took a significant amount of time to create scientific visualization VR applications, as they had to write their own algorithms and data-reading routines,” said Patrick O’Leary, a co-author on the paper and an assistant director of scientific computing at Kitware. “With VTK, developers can access ready-to-use algorithms through a convenient application programming interface.

“These algorithms not only save developers time, but they offer unmatched capabilities for rendering and interacting with data.”

In the paper, “Enhancements to VTK Enabling Scientific Visualization in Immersive Environments,” O’Leary and co-authors describe OpenGL context sharing and VR toolkit embedding. Respectively, these approaches allow developers to use VTK with consumer-level devices such as Oculus Rift and HTC Vive as well as with immersive environments including CAVE™ systems.

Kitware officially added VR support to VTK in version 7.1 with the integration of two modules. Along with VTK, the modules equip ParaView with VR functionality. ParaView is an open-source software solution that analyzes large datasets and employs VTK as its rendering engine. Kitware cited the inclusion of VR functionality in ParaView as one of the notable achievements that led to recent recognition. Last month, the company received theSoftware Innovation award from Albany Business Review, and in November 2016, Kitware accepted an award from HPCwire for Editor’s Choice: Best HPC Visualization Product or Technology on behalf of the ParaView development community.

In future efforts, Kitware plans to bring support for portable, threaded data parallel algorithms to VTK. As for ParaView, Kitware intends to release version 5.3 this month.

“We aim to continue to extend VTK and ParaView to help developers explore data so that they can more easily make scientific discoveries,” O’Leary said.

Two of O’Leary’s co-authors on the IEEE VR 2017 paper, Sankhesh Jhaveri, a senior research and development engineer at Kitware, and William Sherman, a senior technical advisor and team lead at Indiana University, will present their work on VTK and ParaView during the Systems and Applications session at the conference. The session will take place Wednesday, March 22, 2017, from 1:30 to 3 p.m. PST, in Los Angeles, California.

For those who seek to leverage VTK and ParaView in VR environments, Kitware offers consulting and support services. Among its services, Kitware creates custom software, tailors its solutions to specific workflows and performs research and development. To learn about Kitware services and to set up a time to meet with Jhaveri at IEEE VR 2017, please contact kitware(at)kitware(dot)com.